How to Cut a Perfect Mohawk using Frog Tape! This post brought to you by FrogTape brand painter’s tape. All opinions are 100% mine.
So cutting hair isn’t our normal post topic here on East Coast Creative, but when it involves Frog Tape® and a rockin’ hair style… well, I think it’s just right for EC2!  Cutting a mohawk isn’t easy business- do you have any idea how many crooked mohawks there are in the world?  A lot let me tell you!  (and yes, that claim is purely fictional, but I’m 99% sure I’m right!) Thanks to my ingenious husband (or maybe it’s just DIY overkill that made him think of it) we created the easiest way to cut a straight, perfect, and rockin’ mohawk! 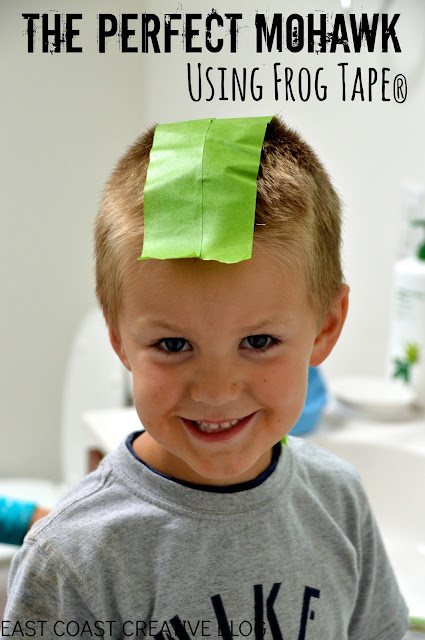 And let me shed a little light on the old ‘hawk before I tell you how to do it.  Callen (my youngest) has my husband’s hair- which means pouffy awfulness.  It’s okay, Eric owns it (aka shaves it all off!) It’s just really bushy and we can’t do anything with Cal’s hair style-wise.  EXCEPT… for an awesome mohawk!  It’s the best style because his hair is going to poof out and stick up anyhow, so it’s just making the mohawk styling that much easier!  Eric and I often chat about which of our son’s hair styles the grandparents hate more… Cal’s mohawk or Kade’s super long shaggy mop.  I still think the long hair gets to them the most! 🙂  (And no, we’re not cutting the mohawk off before school starts next week. We get asked that a lot. Why would we get rid of his swagga just in time for him to meet all the little ladies??)

Alright, so let me tell you how to cut the perfect mohawk so that your kids’ grandparents can think you’re nuts too!
#1- Determine how wide you want the ‘hawk to be.  We liked a pretty thick one, so we used about 2 widths of Frog Tape®.  Now, we were asked to share a project we’d done with Frog Tape®- they said it’s multi-surface tape- good for a variety of materials.  I had already cut Cal’s mohawk and was like, “how’s this for a unique material!”  So, while Frog Tape® wasn’t made with the mohawk in mind… it works like a charm!! #2- Place the tape down on your kiddo’s head exactly where you want the hair to remain. Make sure it’s straight from front to back AND side to side.  Remember… crooked mohawks just aren’t cool!  Don’t worry about pressing the tape down too hard, the edge will serve as more of a guide for your buzzers, not a paint lock like we usually use Frog Tape® for. 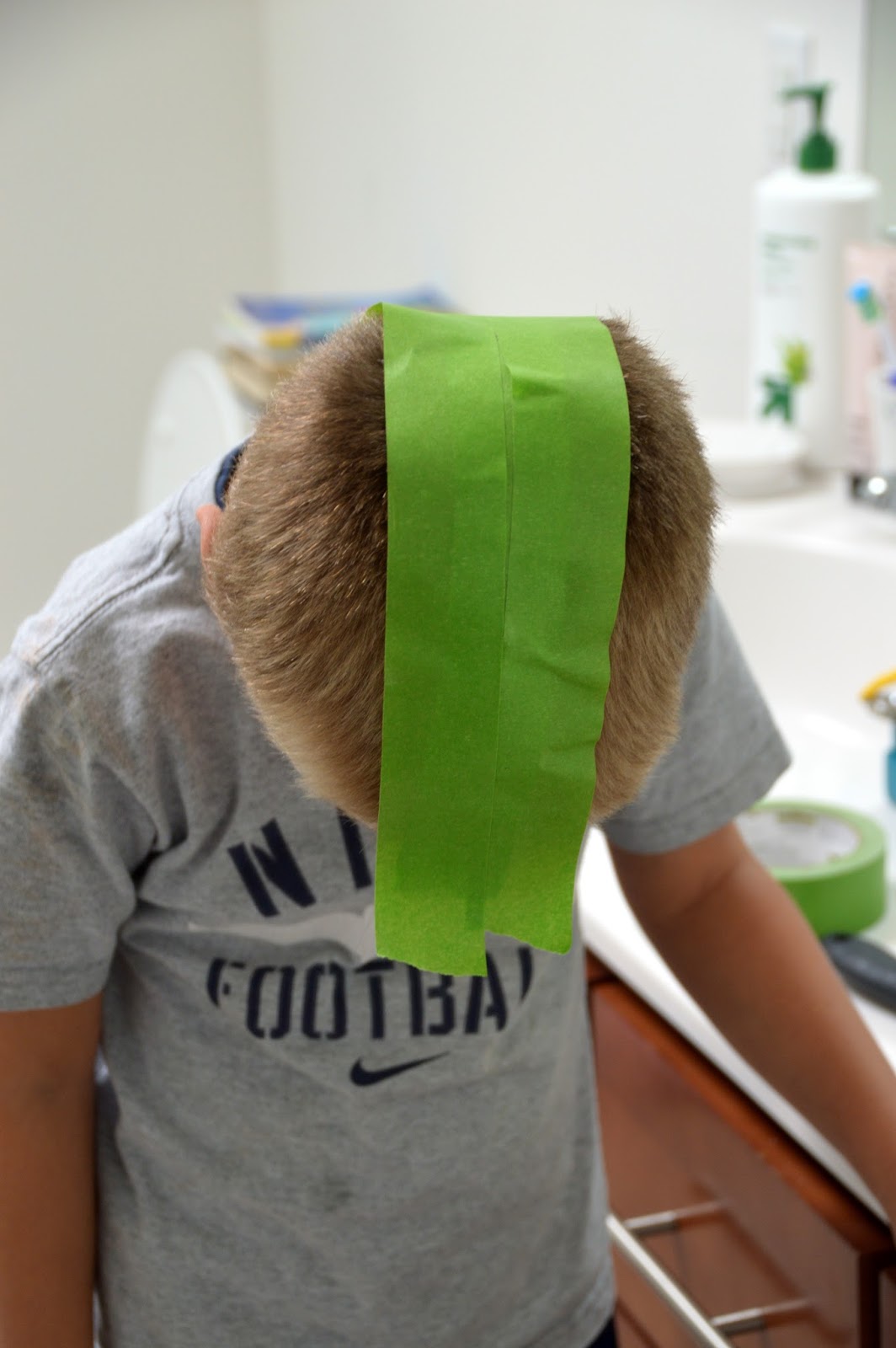 I wonder if this little guy has any clue that this process isn’t quite the norm…  Such is the life of a blogger’s kid!
(Also, ignore the pile of clothes and messy bathroom. This is real life here people! ) 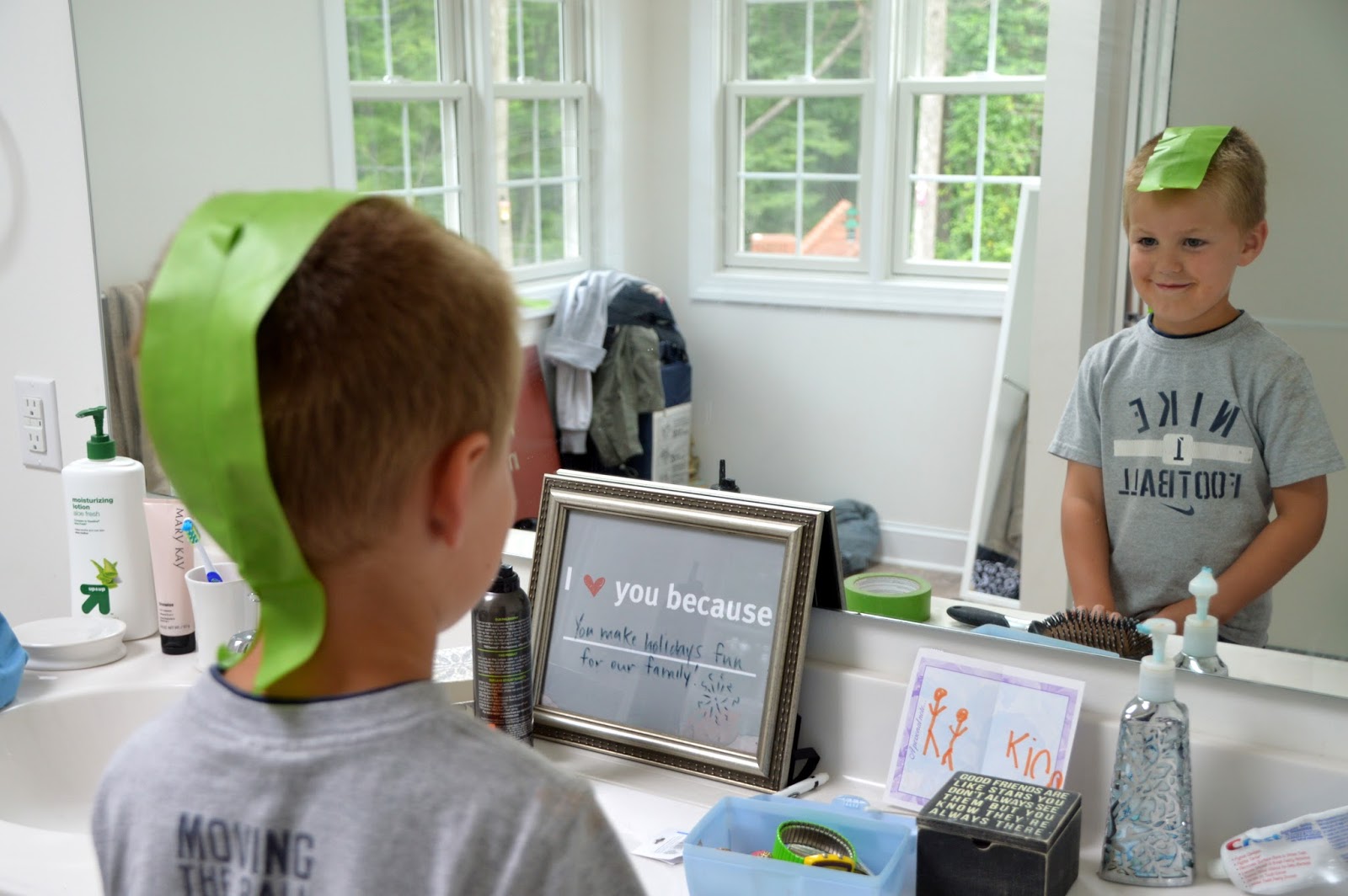 #3- Use your buzzers to shave along the edge of the Frog Tape®.  Don’t press into the side too much, you don’t want a wonky line.  Any buzzers will do, but we’ve always used this Wahl kit. 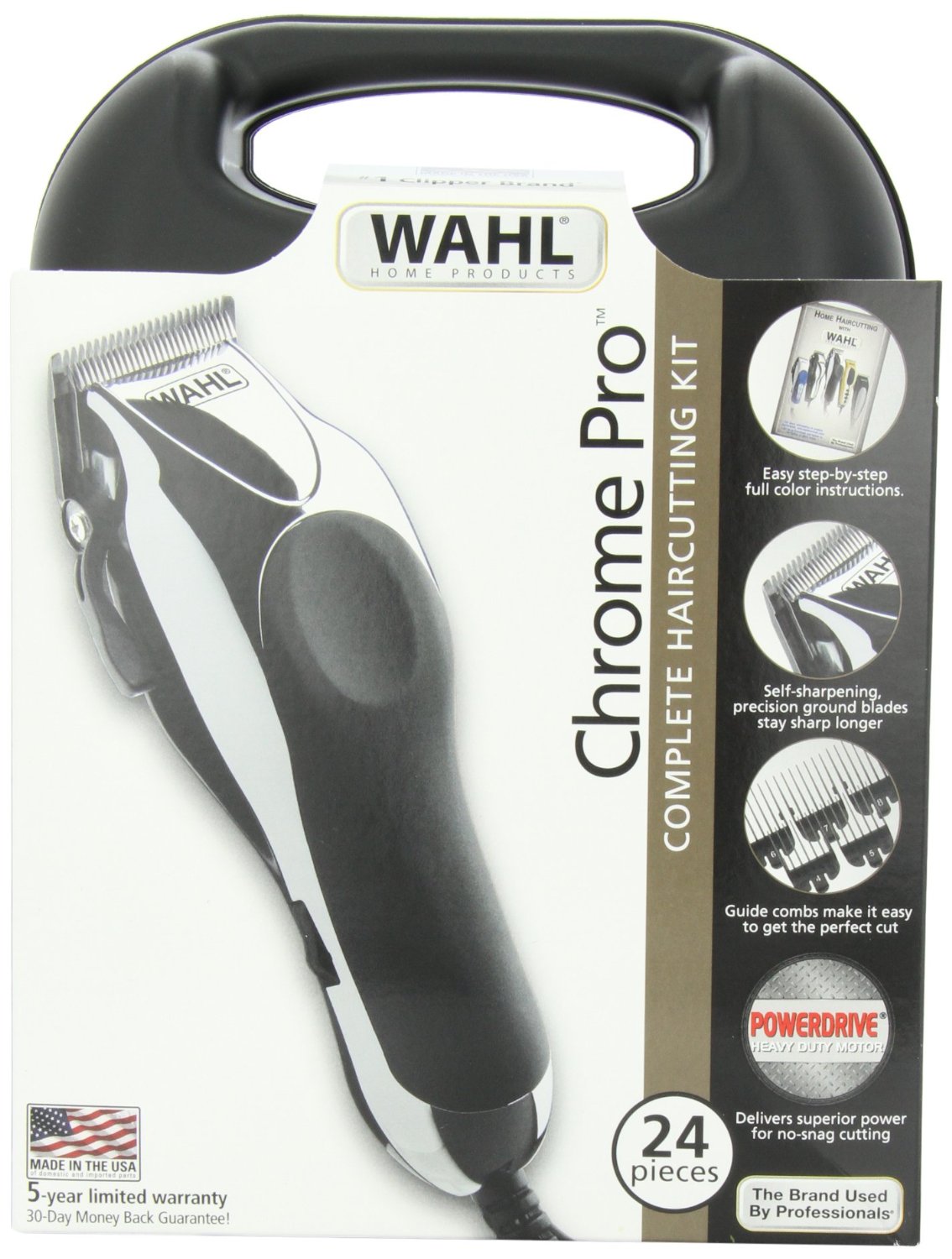 #4- This is just a preference, but we always have our boys sit on a stool in the shower while we buzz.  It’s so much easier for clean up.  We use a hand vac to get as much of the hair up as we can, and then the rest just gets rinsed down the drain.  Easy peasy! 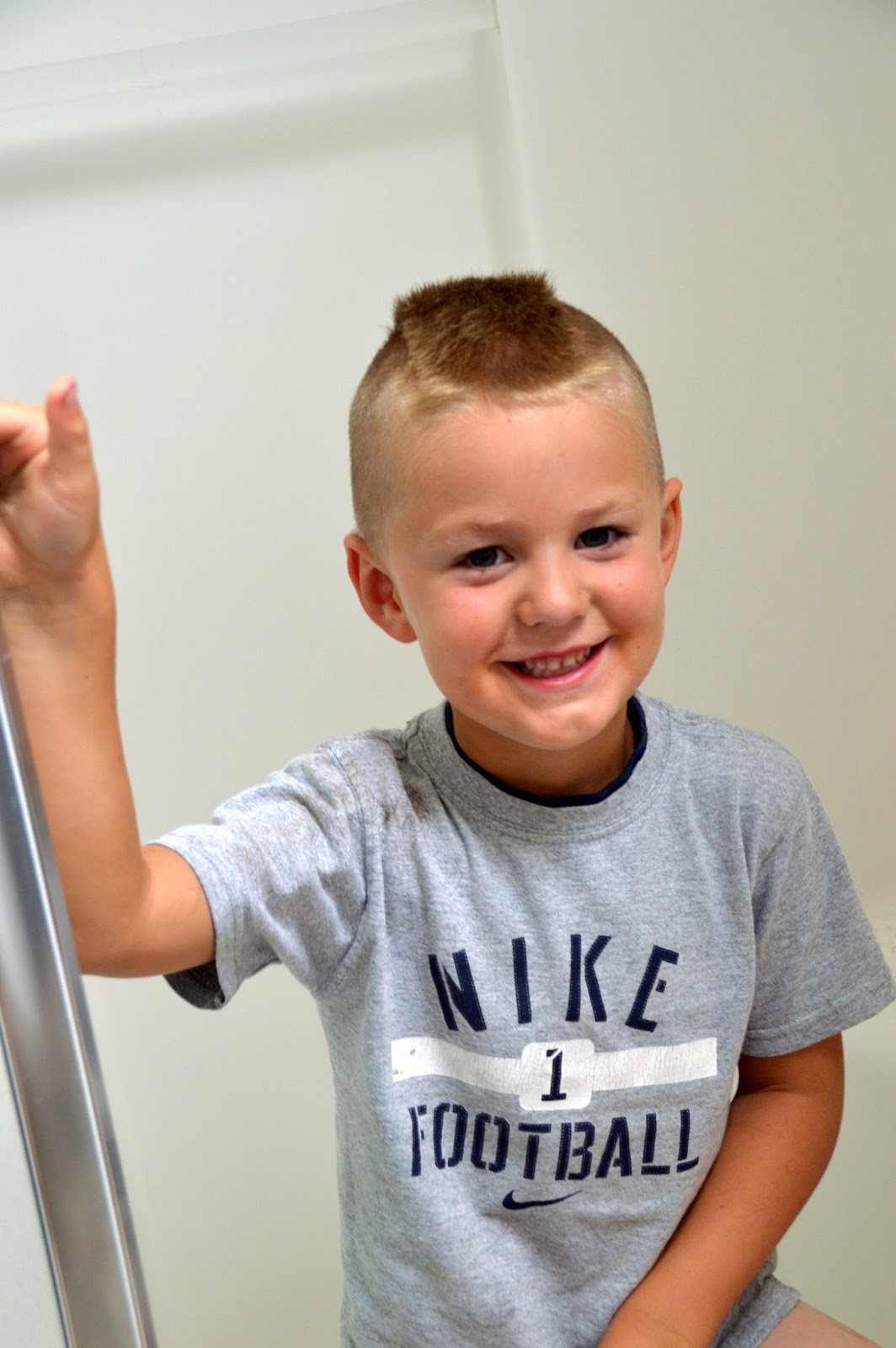 I couldn’t love Cal’s hair any more than I do.  It’s definitely my favorite and it’s sticking around for a long time! Since cutting it in for the first time, we’ve trimmed the sides 3 or 4 times, so now the middle section is nice and long and big boy mohawk-ish! 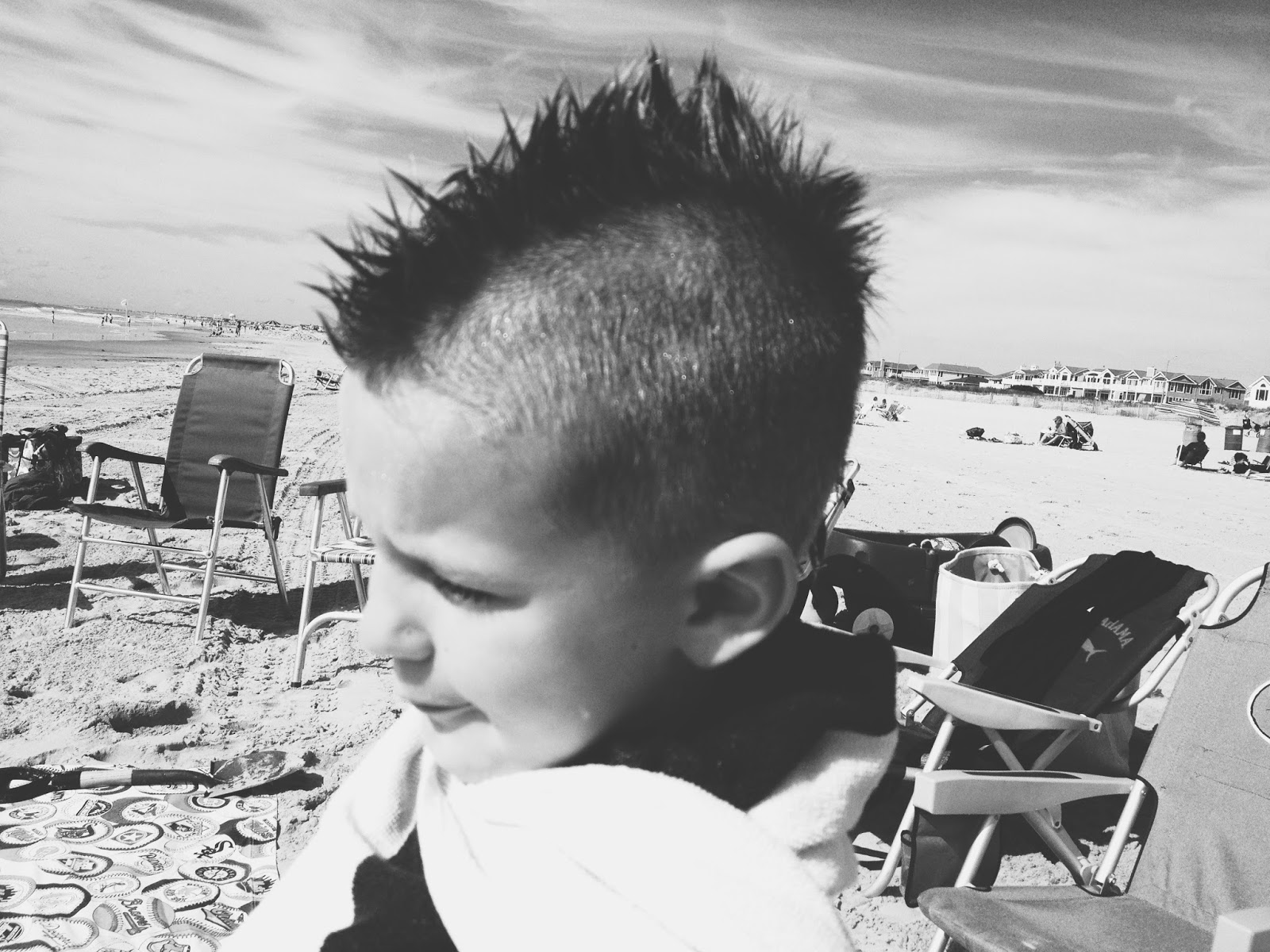 If you’re thinking of embarking on the mohawk journey, I definitely recommend this method to get the perfect mohawk!  A little outside the box, but this straight mohawk just wouldn’t have happened without FrogTape painter’s tape.
We really do love Frog Tape® and have done a lot of cool projects using it.  Last year when we were at the Haven Blogger Conference, we got to meet our friends from Frog Tape® and we learned a lot more about its paint lock technology.  Basically it seals the edge of the tape so the paint doesn’t bleed through!  That’s huge for me because I have some perfectionist tendencies.
Did you know that FrogTape painter’s tape also recently came out with Shape Tape®?  It is patterned tape, so you can get waves, chevron, etc… without measuring! We think it’s pretty cool! Check out a few other projects we’ve one 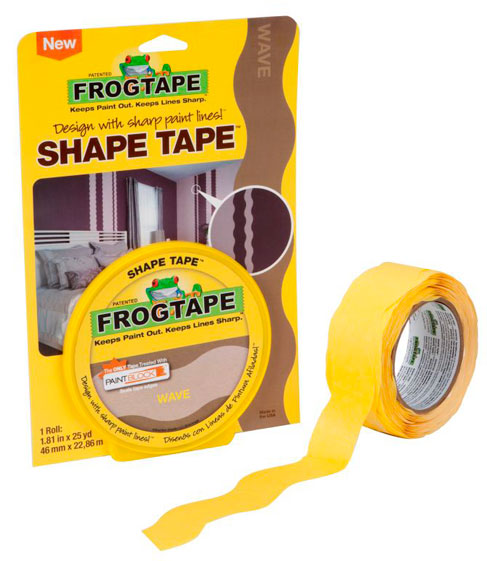 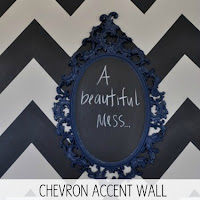 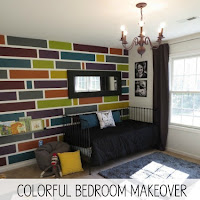 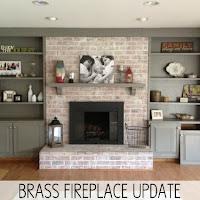 If you haven’t tried FrogTape painter’s tape yet, what are you waiting for?  I mean you can try it on an awesome DIY project for fall OR for the most epic of all mohawks!
Frog Tape is also on Twitter @Frogtape- give them a shout out and share your fall projects!