Well, this isn’t really a project we had planned on doing right now. Especially since we’re still trying to finish the baby’s nursery, put the finishing touches on Charlie’s room and mentally prepare ourselves for another baby. But, sometimes (okay, lots of times, in my case) we get distracted and something else begs for our attention.  Back in May, I posted this picture on Instagram saying I didn’t know what to do with our deck…. 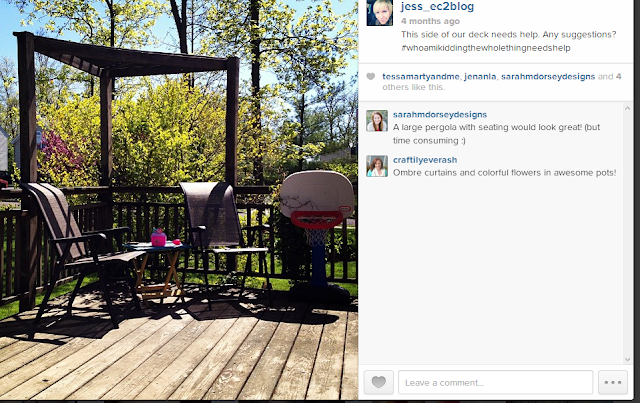 It was a hot mess. Then the arbor thingy you see above broke in a storm, which led us to begin our deck transformation. I’m not kidding when I say I really wanted to tear this deck down because I didn’t think it could be redeemed. I mean, we had done some cute projects to spruce it up, like these DIY shutters and window box, but even that couldn’t hide the fact that this deck was ugly. 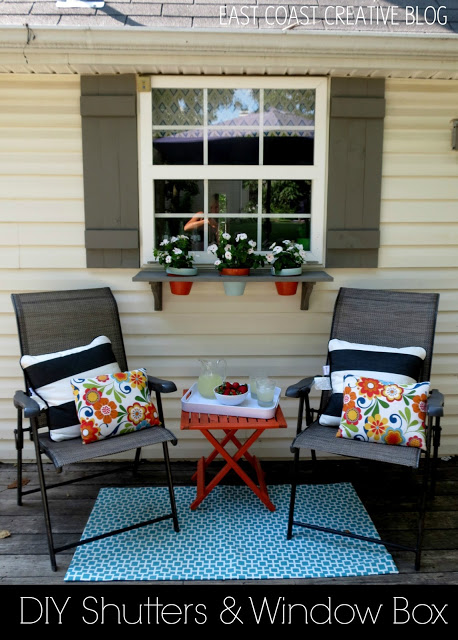 We decided to go ahead and try power-washing it before burning it down (haha-kidding….sort of) to see if that would help at all. It was really beat up, graying, splintery and just plain ugly. Oh wait, I mentioned that already, didn’t I? Just take a look: 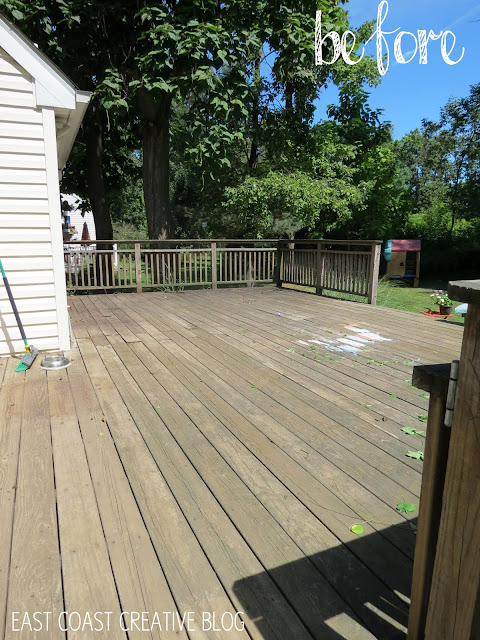 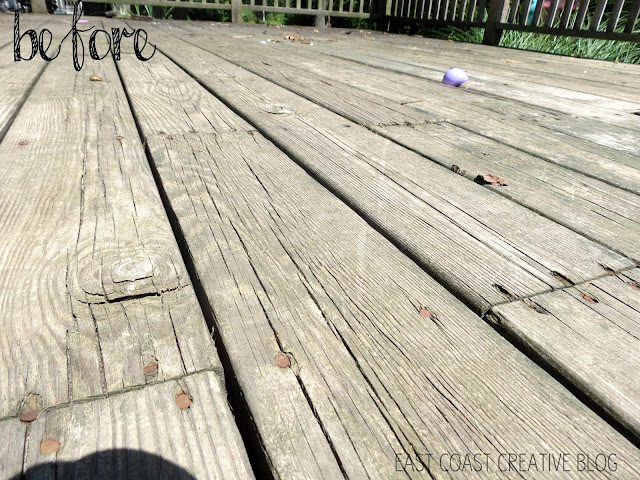 In the picture below, you can see that the top of the arbor had been removed, but the posts were still there. Plus, there was that one giant bush that was all up in the deck’s business too. The first thing we did was cut the posts down and cut back the bush. You wouldn’t believe how much that opened things up on the deck. 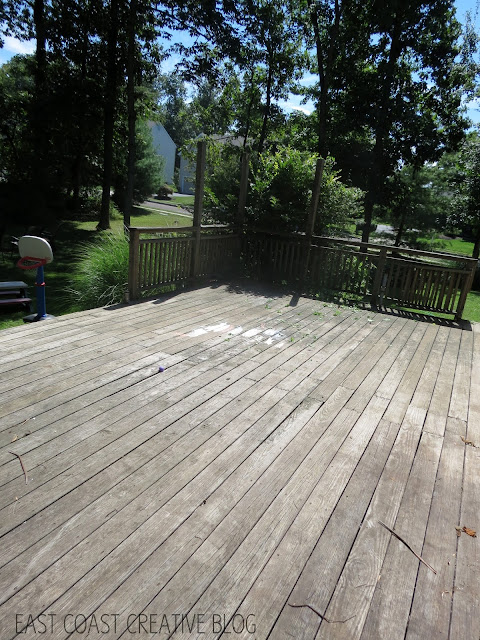 We borrowed a power-washer from Kevin’s grandpop (who owns a painting business) and went to town. Immediately we began to see a major difference! 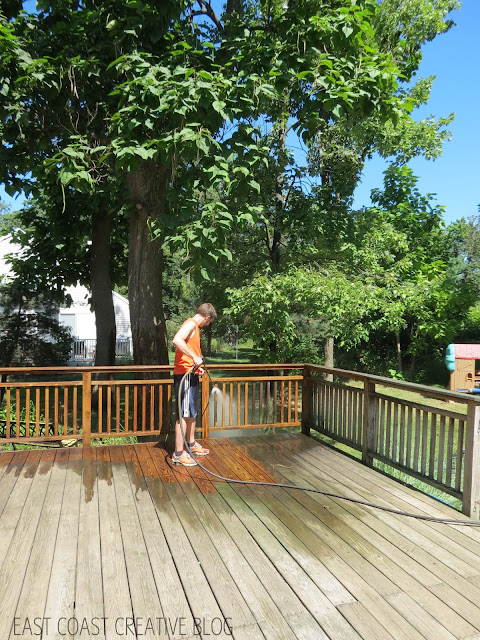 Ewwww….that gray grime is just disgusting. But the wood underneath was in beautiful shape- I seriously was beyond shocked. Who knew that was under there? 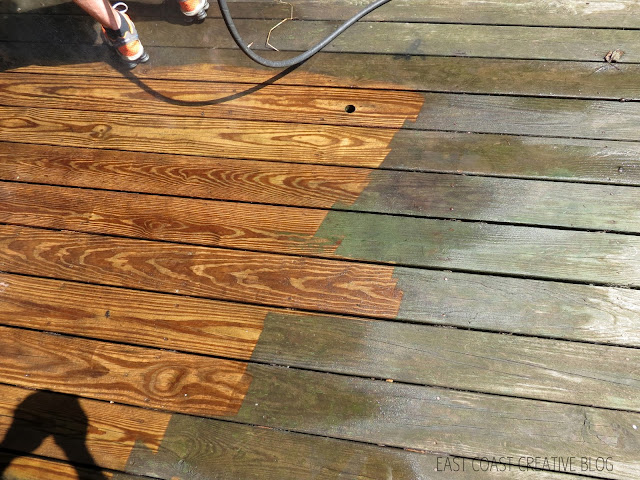 Again I went to Instagram to post the progress. Why did we wait six stinkin’ years to do this?? And if you don’t follow us on Instagram, you totally should. I mean, two posts about a deck should have you banging down our IG doors, we’re just that exciting. Follow us at Jess_ec2blog and Eastcoastcreative for lots of fun, juicy stuff like deck cleaning. 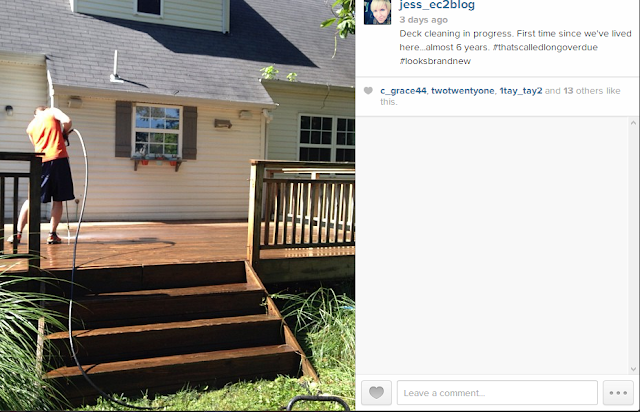 Anyhow, look at our gorgeous deck now! It’s like she was just built yesterday! 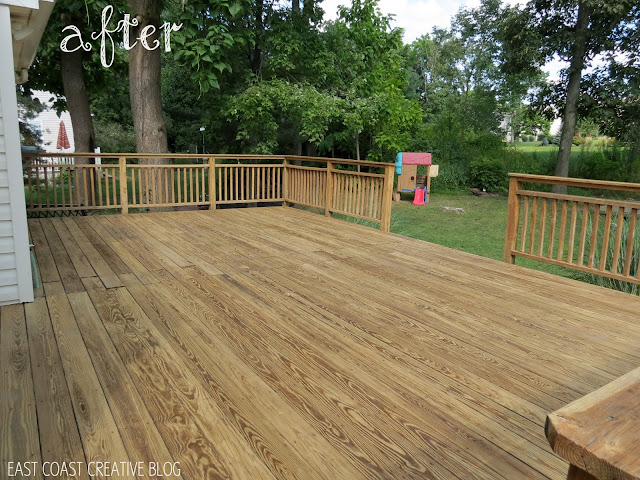 Without that big bush and the trellis/arbor thingy (what WAS that thing?) the other side of the deck is wide open…just one big open slate! 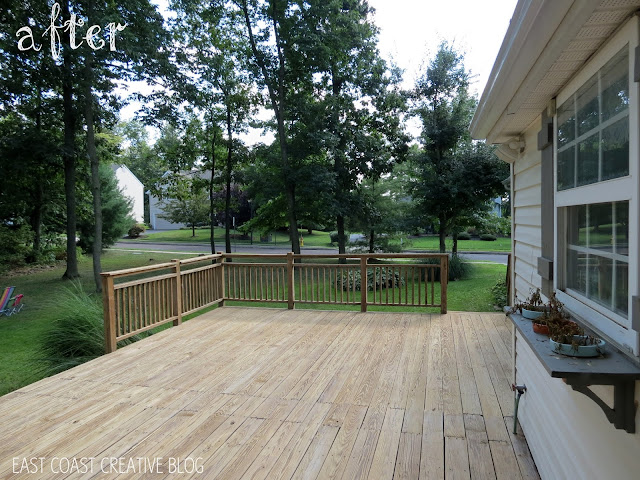 (Pssst…did you notice how well my flowers fared in my window box? Ha. They didn’t stand a chance.) 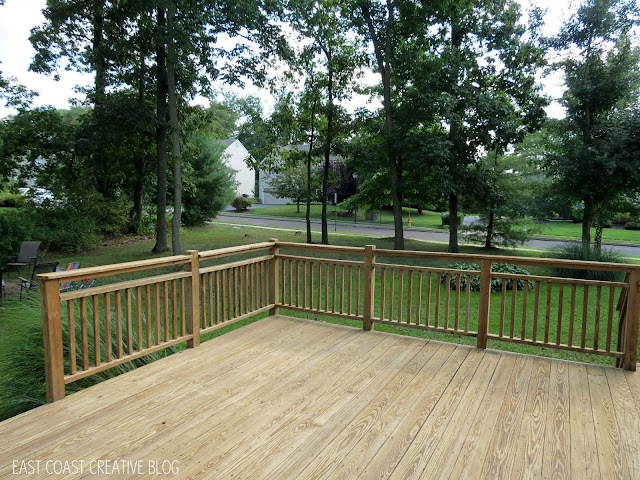 Ahhh….I’m in love. With a deck. It’s just not right. But it’s the truth. The next step is decided what to do with the deck now that it’s so fresh and so clean, clean. I’m leaning towards staining the deck a nice gray to go with our gray shutters and painting the railings white. Sort of like this: Source
Pretty, right? Kevin’s grandpa swears by Sherwin Williams Deckscapes, so we’ll probably go that route just because we know it’s good stuff. I really like the idea of a semi-transparent stain so that some of the wood grain shows through. 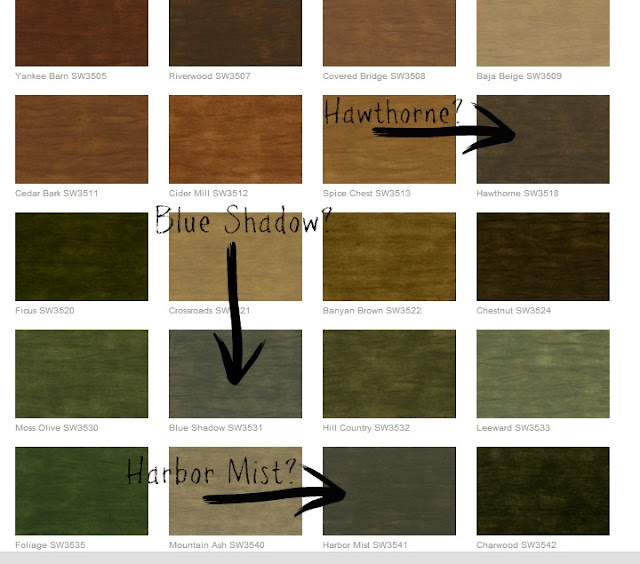 What color would you choose? Have you ever used Deckscapes? Has a power-washer ever changed your life?
I’m hoping to finish this bad boy up this week…that is, unless I get distracted by something else. 😉