This post brought to you by Whitney Farms. All opinions, creative ideas, and the cute kid are 100% mine.
My oldest child is a lot like her grandmom.  She loves all animals, being outdoors, and growing things.  At any given time you’ll find at least two Red Solo Cups filled with dirt and some kind of seed on my kitchen counter.  This spring Kenzie started sectioning off a little area of one of our beds as her “garden.”  We decided that a kids garden was a great idea and let her run with it.  Of course it got my DIY wheels turning, and I actually struggled with letting go and letting her “make it her own,” but, in the end, I think she did a fabulous job and her garden is just how she wanted it.
Here’s a peek into Kenzie’s Garden… 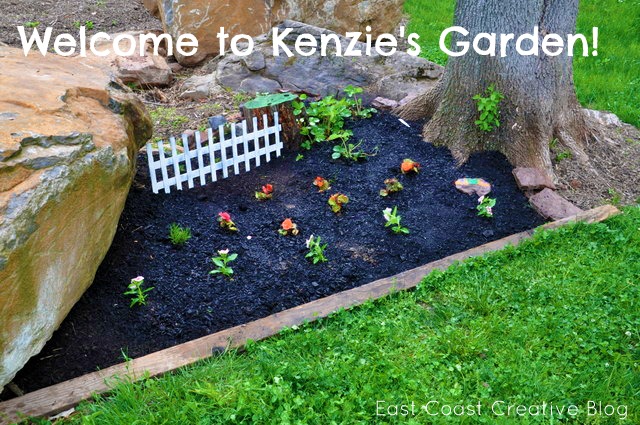 Greenhouse Starter Kit
Her kit was an Easter present and all the plants are doing so well. We plan to transplant them in about two weeks.  We’ve still been having some cold nights here in Bucks County.
Painted Rocks
What’s a garden without some pretty rocks?  Kenzie LOVES our dog Pennlyn, so this rock is for her!
We used acrylic paints, but coated it with a spray sealant to keep the rain away.  She tested it with the hose before this picture. 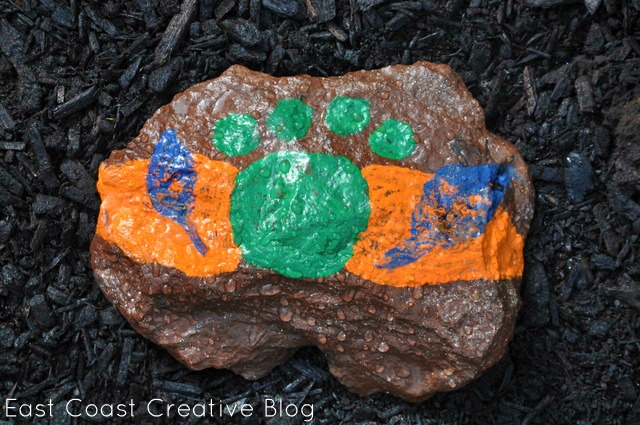 Garden Sign
I wanted to make an awesome barnwood sign with a custom transfer etc… but my girl had other plans.  Sometimes it’s hard to let go and let her do her own thing, but she was quite pleased with her little yellow sign.  I think it’s pretty cute too.  These little wood plaques are at Michaels for $0.99! 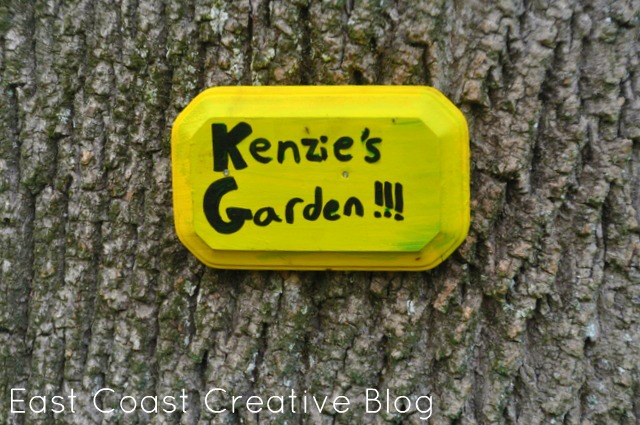 Paint Stick Fence
This project was a little tricky because Lowes wasn’t really into the idea of giving me 50 paint sticks.  They did give me 30ish, so we decided to spread them out a bit more and make it work! I also bought two yard sticks.
To make the fence, we just used a staple gun to connect them to the yard sticks. 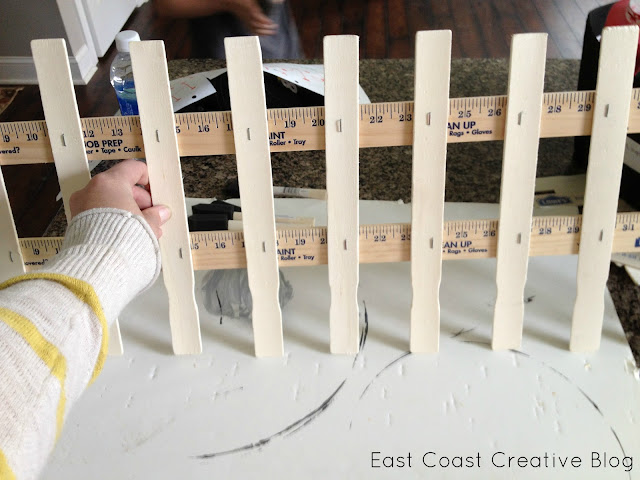 Kenzie painted it black and then sprayed it with white spray paint to give it an “old fashioned” look, as she put it.  I think for under $1.00 it’s perfect for a kids garden!
(I also think it would look adorable to have an ombre fence, by lightening each picket. Not that I  butted in and suggested that to Kenz, of course not! 🙂 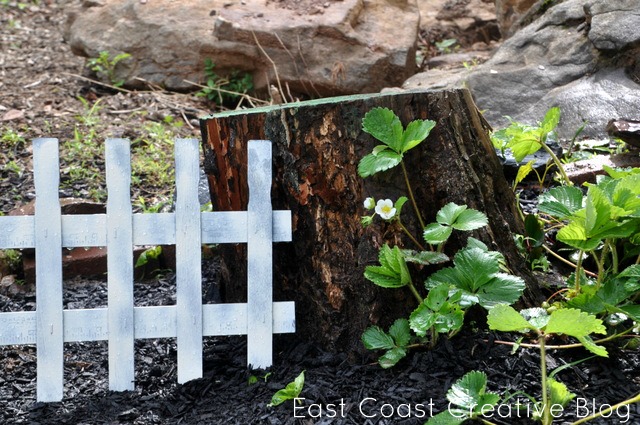 Paint Stick Labels
Another really simple, but fun project with paint sticks.  She and her BFF painted them during a sleepover this weekend, then used a sharpie to write the names.  I sealed them with Valspar’s clear spray sealant.  I think they’re so cute! 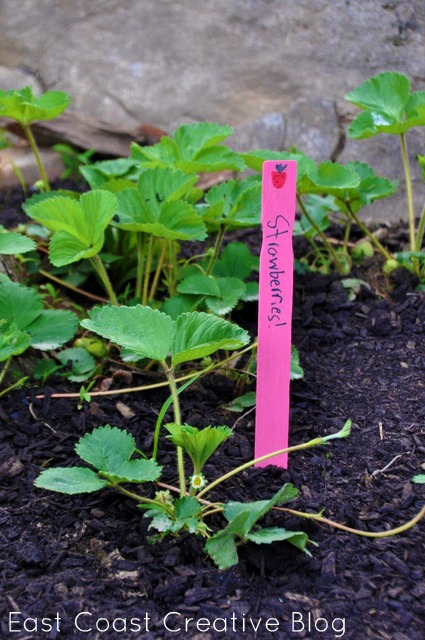 Plants
Kenzie chose all of her own plants (I might have been tempted to make suggestions, but I kept them to myself).  She has sunflowers, strawberries, a tomato plant, vinca (my personal favorite), lavender, and I’m pretty sure she planted a maple tree!
We already have strawberries! (We had these plants from last year, so they got a head start) 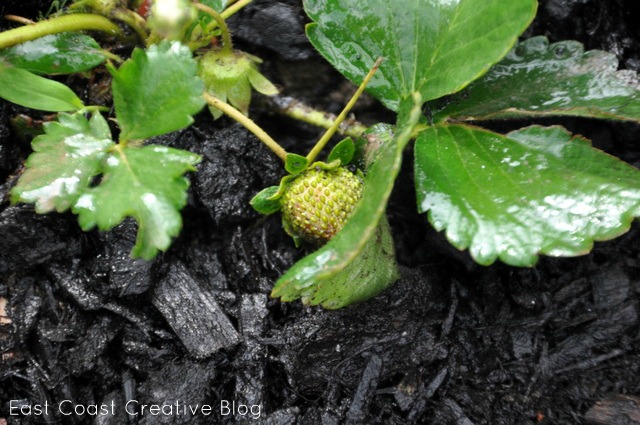 We planted some vinca because it’s the best flower ever!  Really, it loves the heat, doesn’t need to be watered hardly ever, and gets lots of flowers.  This is perfect for kiddos because it doesn’t require much, and will bloom all season long. 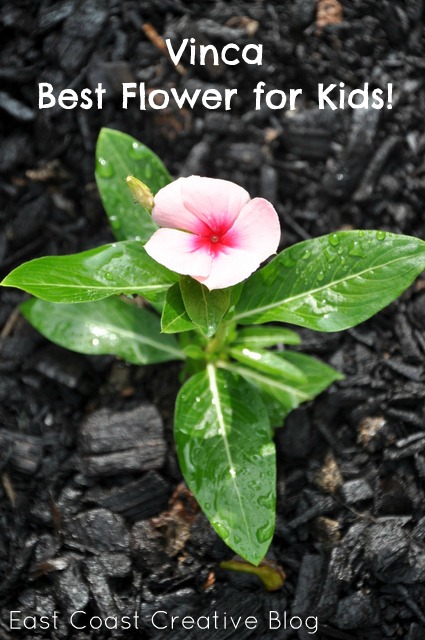 I’ll be completely honest, I’m not the most organic person you’ll ever meet (ask my good friend Steph!)   But, I didn’t want Kenz handling a bunch of chemicals and toxic stuff.  I was thrilled to find out about Whitney Farms® organic plant food.  Kenz asked what was so special about it, and I explained that it’s basically plant food made from all healthy stuff from the earth.  She was cool with that answer and I’m a happy
mom because I know she’ll be safe working in organic soil and still have some huge, healthy flowers soon!
.

So, does your kiddo have a green thumb?  Maybe it’s time for you to start a kids’ garden too!  I hope Kenzie’s projects have inspired you! She was pretty excited that she was getting “her own blog post”  Ha!  Oh, and the good folks at Whitney farms are giving you a $3.00 off coupon if you want to try it out for yourself! We can see who’s flowers get bigger!
If you have a second, let Kenzie know what you think of her garden in a comment! Thanks!