My daughter turned four a few weeks ago, and as her gift, we promised that Daddy would build her a new playhouse loft bed, and then Mommy would decorate it. We love our girl and were more than thrilled with how excited she was about her new bed. Every day of the week we built it, she would ask us if it was done and could she sleep in the loft? My hubs could not be more proud of the work he did (he did a seriously amazing job!), and I’m so excited to share it with you today!
Playhouse Loft Bed 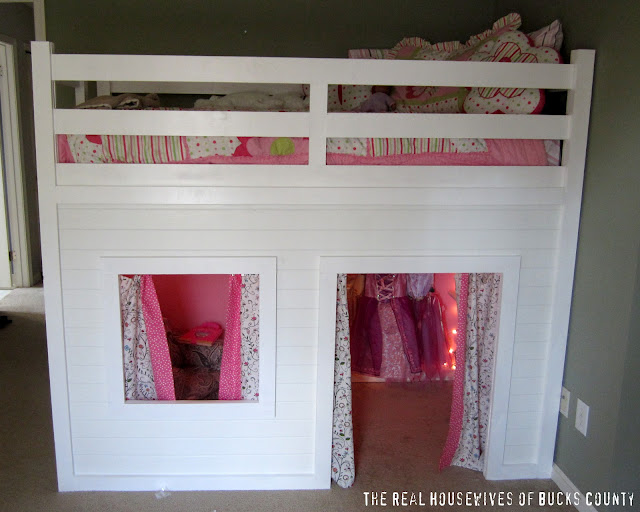 This is not a tutorial, because we basically followed Ana White’s plans word for word, although we did make some minor adjustments to the bars at the top of the bed. Check out her plans here for more information. 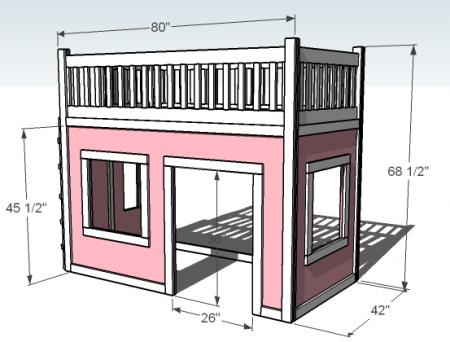 We cleared the bed out of Campbell’s room in preparation for the building process. Because of the size of this bed, my hubs had to build it in pieces and assemble it right in the room because it wouldn’t fit through the door. 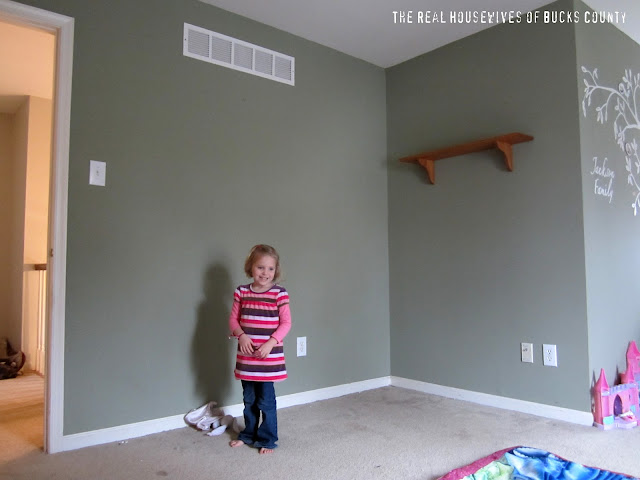 Poor girl slept in a sleeping bag the entire week! (Find out more about the family tree mural here). 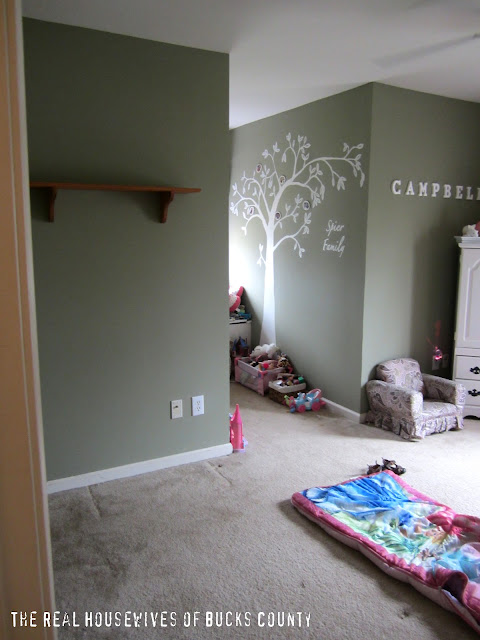 I can honestly say that I have the best in-laws ever. They willingly help out whenver they can and we so appreciate them! My hubs called in my father-in-law for reinforcements, and we were thankful for his expertise! 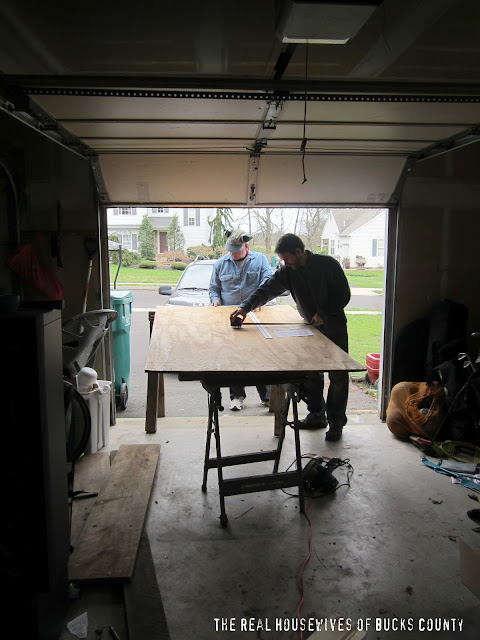 The biggest expense is obviously all the wood you need to build it. Since my hubs has such a limited amount of free time (he works 6 days a week!), we decided to have Home Depot make all the cuts for us to save some time. It worked perfectly- in about an hour, the really helpful Home Depot guy had all the cuts done, whereas we would have had to set up a work area, do all the measurements, make the cuts and clean-up which would have taken loads more time. They didn’t charge us for any cuts since we bought so much wood (about $250 worth), so it was totally worth it. 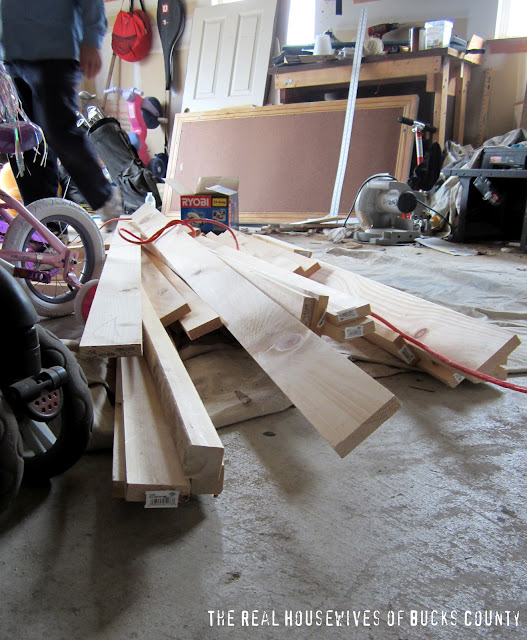 Ana’s plans are pretty extensive, but my hubs and father-in-law quickly threw them around on the floor in a haphazard manner. I’m not really sure how much they actually followed the directions, now that I think of it… 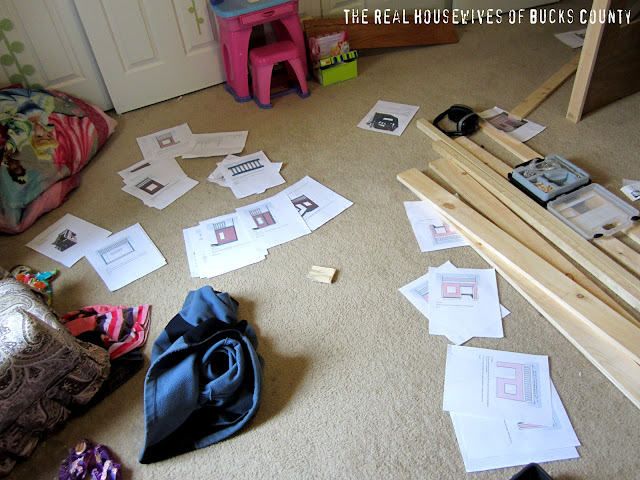 But after a few nights of building, a few more of painting and decorating, we had this: 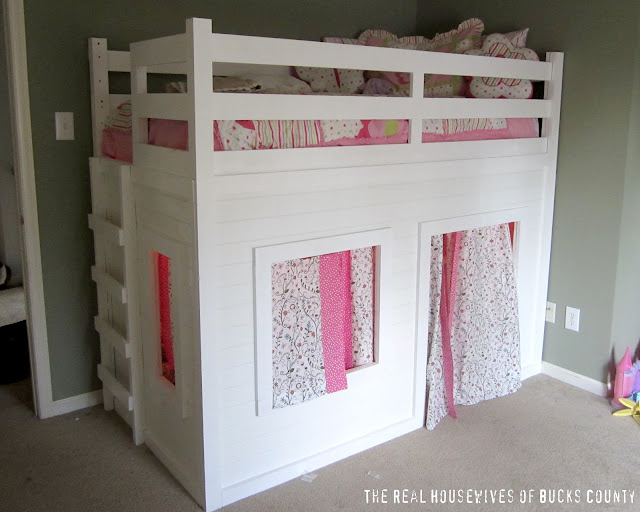 Pretty adorable, right? One of my favorite parts of the house is the faux “siding” (which is pretty hard to see in pictures). We saved a bit of money on a couple sheets of plywood since we already had them on hand, so I splurged on two sheets of faux wood panelling ($24 each) that we hung horizontally on the outside walls. The guys used wood glue and clamps to hold it in place until it was secure. It adds such a cute touch and I’m so happy we decided to go for it. 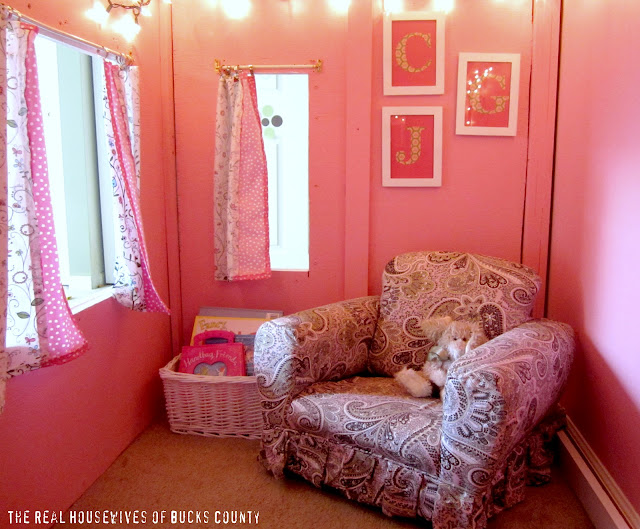 The inside walls are painted an in-your-face pink that made it ridiculously hard to get a good picture. Note to self: 1) Turn off Christmas lights before taking pictures next time, 2) Straighten picture frames after the kids attack that area, 3) Don’t try and take pictures with the kids around because they immediately mess things up. Ah well….life with kids!
I wanted a place for Campbell to play dress-up and also a spot to corral all her jewelry and makeup, so I created a little vanity area with a simple mirror from Walmart ($4) that I spray-painted and a shelf that was already in her room that I spray-painted white. The two little patterened boxes are from Walmart, as well, and were only $.99 cents each. Score! 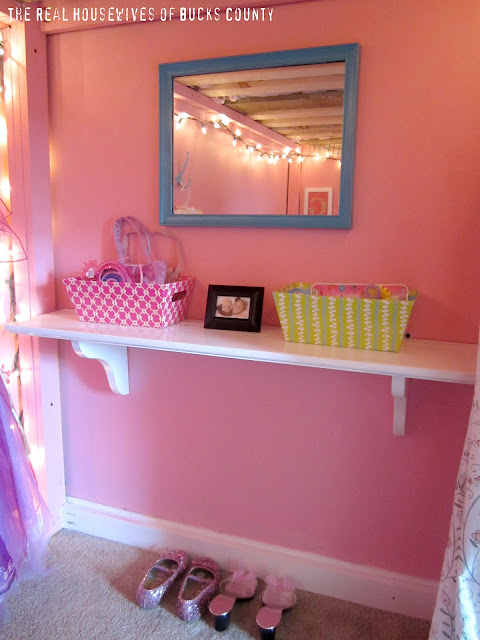 I found the super-cute flower hook at Joann’s on clearance for $2.00 and used two Ikea hooks I had on hand to create a place to hang her princess dresses. The flower hook was already blue, but I spraypainted the other guys a similar blue for a cohesive look.
My wonderful mom bought fabric from Joann’s and whipped up some curtains for the windows and door. I still need to make some tiebacks, but I love the polka dots and sweet flower prints! 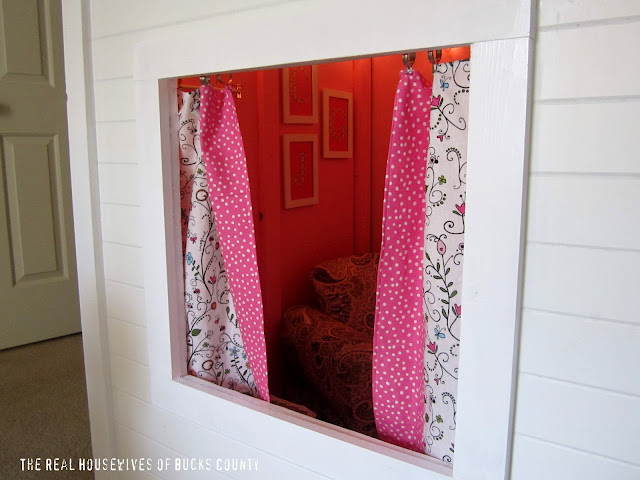 Our original plan was to build stairs, but we didn’t have enough space, so Kevin built a ladder, which she actually loves. She did fall all the way down once, on her very first try, but she’s gotten used to them, by now!
All in all, this playhouse loft bed made one little girl very happy, and that’s just what we wanted. Woohoo! 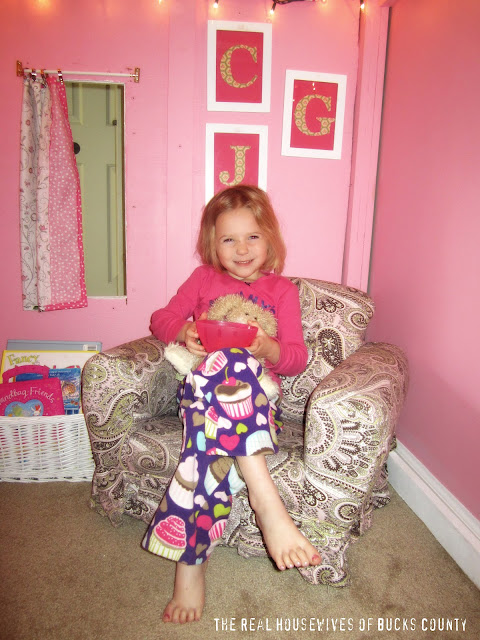 Did you have an awesome play area when you were little? What was it like?