Did I ever mention that I’m impulsive? And that I’m really good at convincing my hubs that the impulse is a good one? Well, I am. Such is the case with our kitchen renovation. I have, of course, been thinking about creating a more open kitchen, one that flows easily into the dining/living room, but it was sort of a spur of the moment decision to tackle that project the week before Christmas! . All of this was inspired by our oven breaking down. We needed a new oven, so why not remodel the kitchen while we’re at it??!! Yes, I am crazy. However, I couldn’t be more excited about this project, especially since it’s the first full-blown remodel my hubs and I have ever done! We’re totally newbies at this, but I’m fully confident we can handle it. And we know several DIY “experts” that we can call with questions.  I keep telling my hubs that unless we burn the house down, there’s nothing we can’t fix. Can you tell that I’m an optimist?
Disclaimer: This is going to be one long, ongoing project that will probably take several months to completely finish. I’ll be walking you through all the nitty-gritty details, ala Young House Love, so don’t expect the “After” photos next week! 🙂 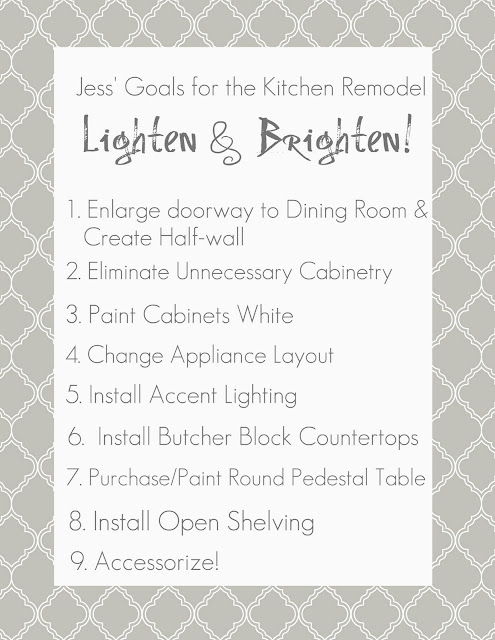 Here’s a peek at our kitchen BEFORE: 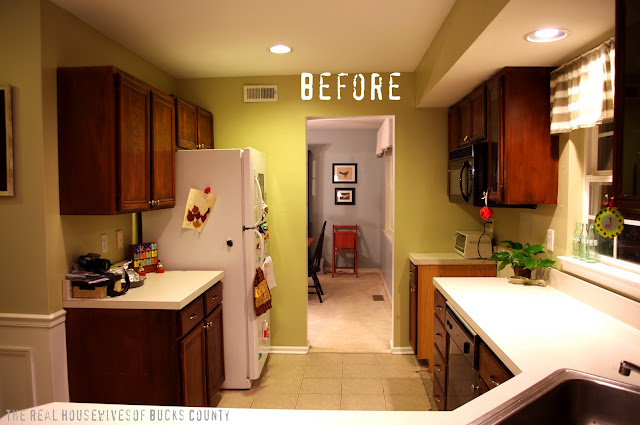 That’s the dining room beyond the kitchen. See how closed off it feels? That doorway could not be any more narrow! 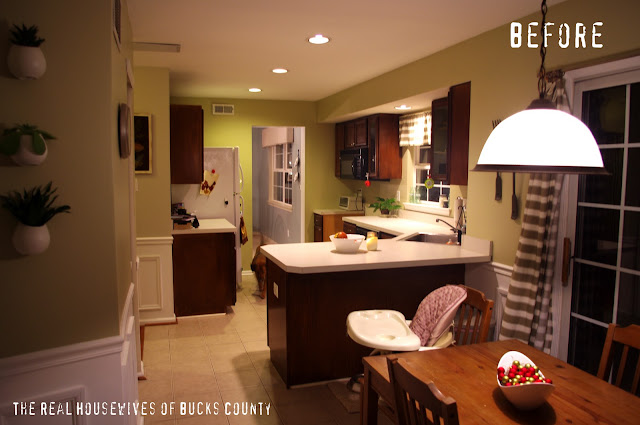 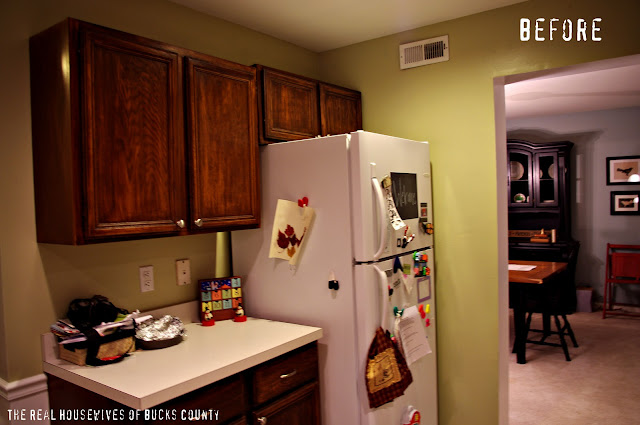 This wall is getting a MAJOR makeover. You won’t even recognize it- I promise! 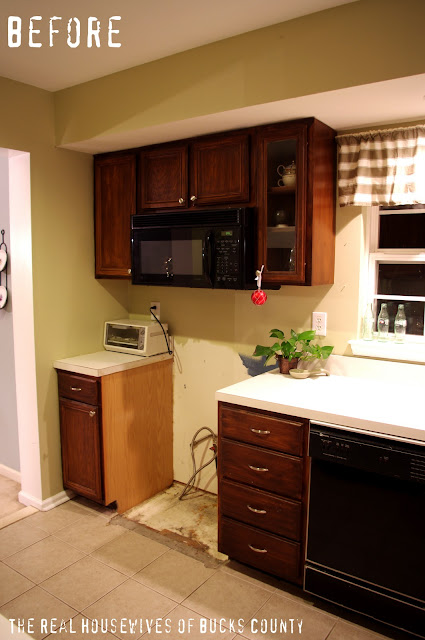 That hole there is where the oven used to be. It now has another home! 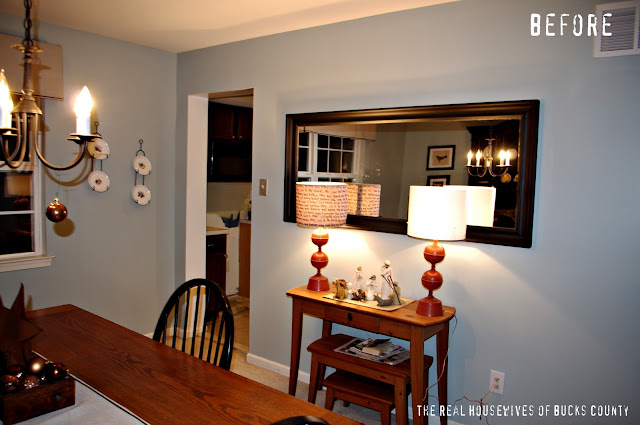 And now, the view into the kitchen from the dining room. The first thing we did was take down that huge mirror. We’re so lazy that we didn’t ever take that thing down when we painted the room. We just painted around it (in our defense, it’s HEAVY, and was really, really attached to the wall). Then we measured and marked and measured again where we wanted to take the wall out. We didn’t really use any scientific methods here- we just planned according to what looked good to us, and also where the studs were located. (I’ve highlighted our sketch below so you can see it better:) 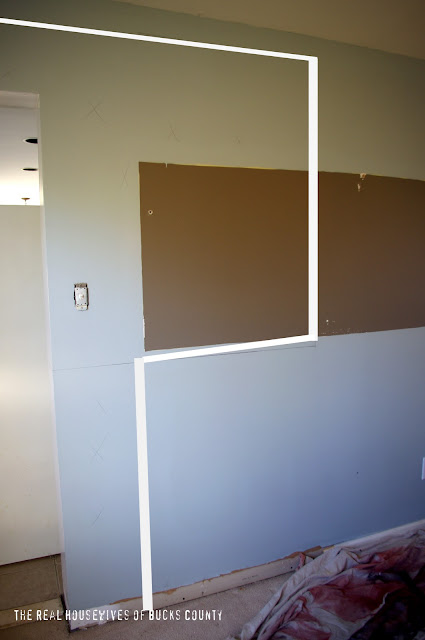 Then, it was demo time! The hubs took his drywall saw and started cutting away. 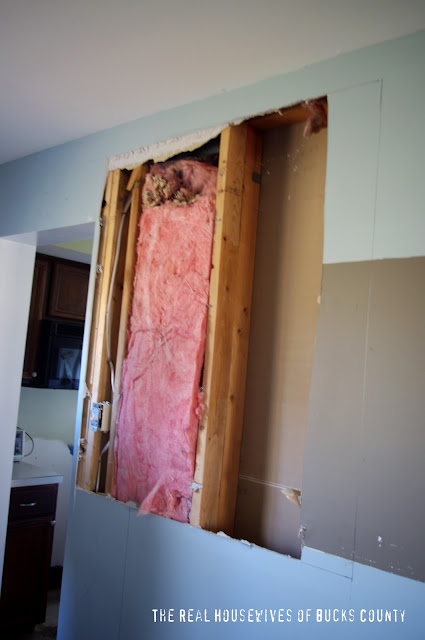 Oops! There was a major heating duct running right through the middle of our opening! Gah! I’m pretty sure that my hubs was less than thrilled with me at this point (and that’s putting it nicely). Lesson learned: do some research, like cutting a small hole in the wall to see what’s in there first, before knocking down the entire wall. Luckily for us, after some brainstorming, we realized that this duct could be cut down and redirected (more on that in a minute). 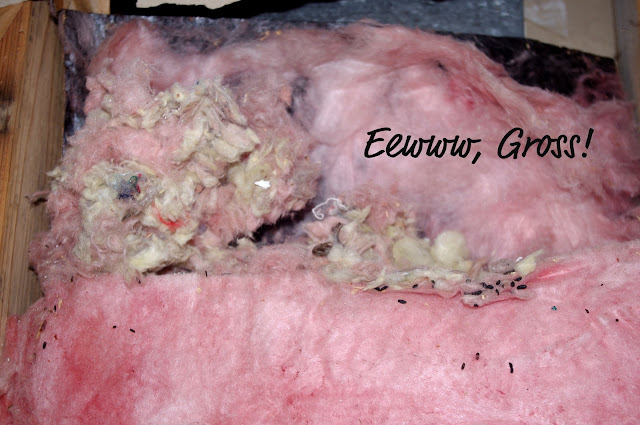 Demolition is not glamorous. In fact, it’s gross, messy and downright ugly. You might even find mouse droppings everywhere, along with the home they’ve made in your insulation. Makes me gag just thinking about it. 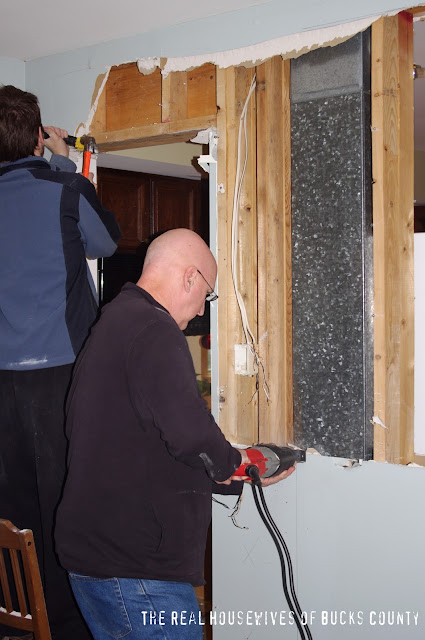 We took out that unbelievably-foul-it-makes-me-want-to-throw-up insulation and got to work cutting the duct with a sawzall. We called in the big guns, aka, my father-in-law, to help since he just remodeled his kitchen and it’s ah-mazing! At first we just cut it to the height of the half-wall while we decided what we wanted to do from there, but then we decided to remove the entire duct and redirect the vent into the dining room. 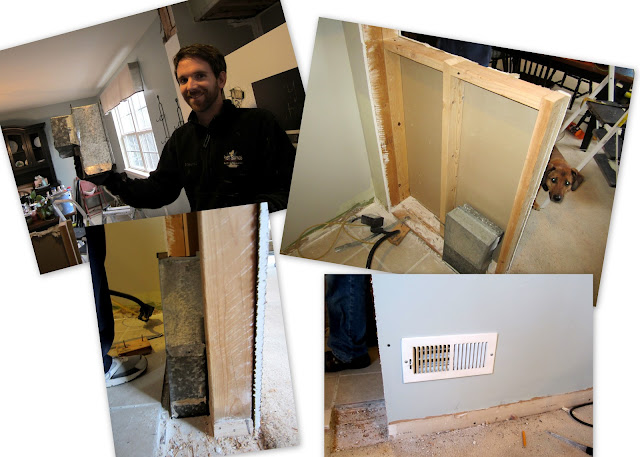 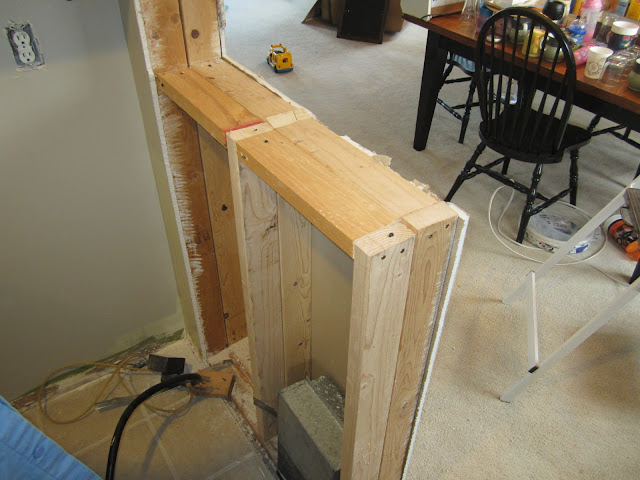 The next step was rebuilding the half-wall to make it sturdy. The wall that we removed is a not a load-bearing wall, so it was ok to take it out. Definitely check with someone who knows whether a wall is load-bearing or not before removing it! For whatever reason, this wall had (2) 2×4 studs backed up to each other (for extra support maybe?), so he re-installed new studs with braces in between them. Then came the drywall- an exciting step for me because you really start to see what it’s going to look like! 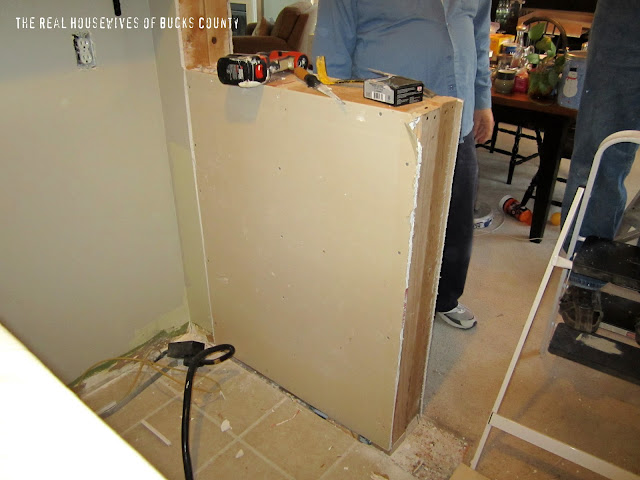 Of course, we still have to add corner bead, spackle, sand and paint the wall, and add a piece of decorative wood that will act as the countertop to the wall. Phew! The list of things is overwhelming, but the important thing is, we’re making progress! 🙂 So here’s where it stands right now: (and yes, you’re getting a glimpse of the few other changes we’ve made, but I’m saving those for another post so this one doesn’t become the longest post you’ve ever read and are not that interested in ;): 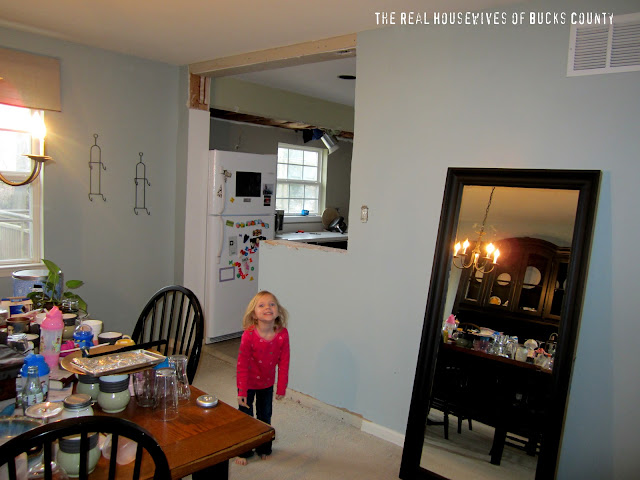 It already makes a HUGE difference in how the two spaces feel, and I can tell that we’ll be using our dining room in a whole different way in the future. 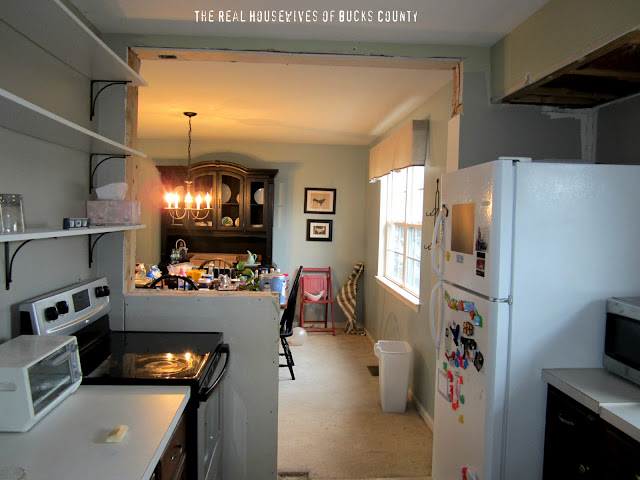 It makes the kitchen so much larger, it’s nuts. Woohoo! I can’t wait to get to the fun stuff- decorating!
So, tell me, have you ever remodeled a kitchen?
Do you have any tried and true tips we should know?
And oh yes, this is getting pretty annoying: 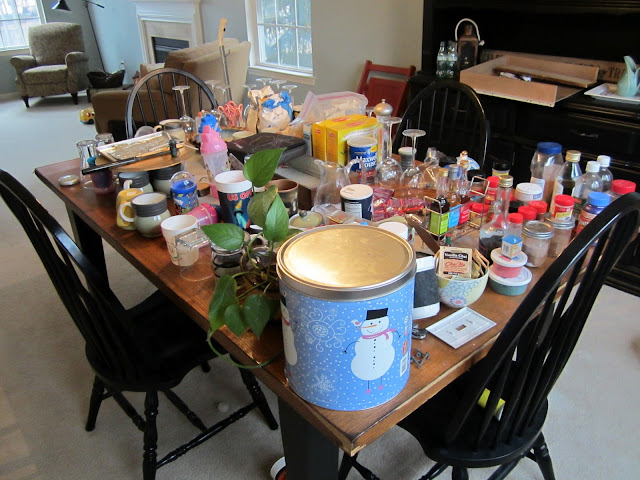