Dreary to Cheery Family Room Makeover {Knock It Off} Have you ever looked at your house and thought, well… this is just what it has to be.  I can’t do much to change it.  That’s exactly what we heard from Terry, the homeowner of this episode of Knock It Off.  I should mention that even though she wasn’t liking much about her house, she had the most meticulously clean and cared for home- I want to be like her when I grow up!  Now, back to the design- Terry had dark wood everywhere (which some peeps love, but it was dragging her down), wallpaper from almost every decade, and just not a whole lot going for them… Or so she thought! 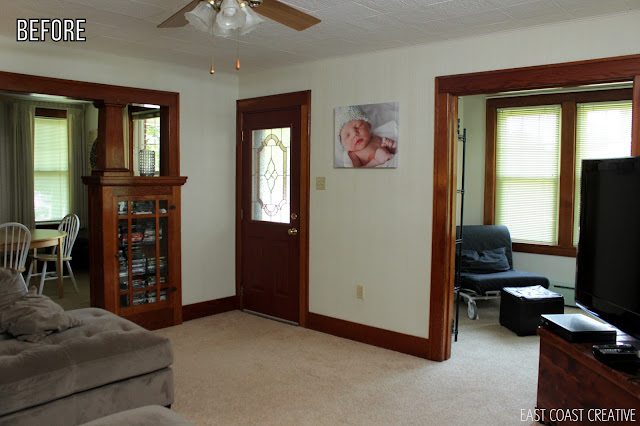 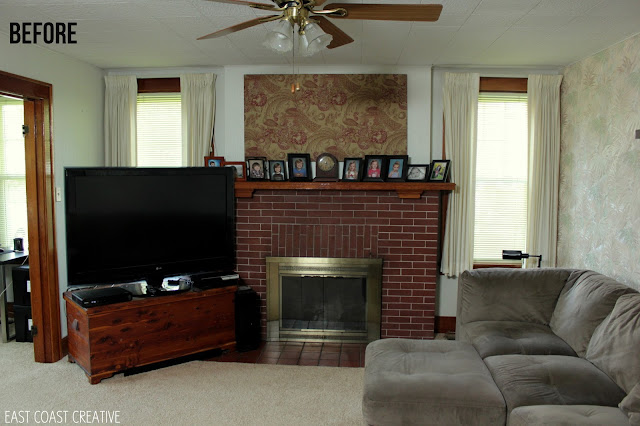 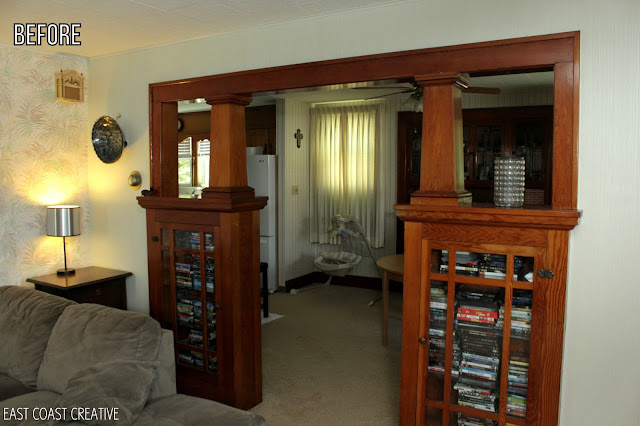 See what I mean?  It’s just not the kind of room that inspires you to “Be Awesome” on a daily basis.  So, Jess and I decided to take this room from dreary to cheery (yes slightly cheese ball-ish) with a really fun, bright color palette.
Warning: If you have an aversion to painting real wood- don’t read any further.  You’ve been warned! 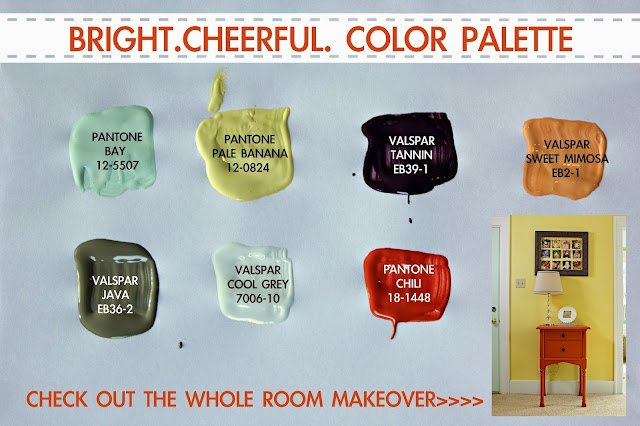 How’s that for bright and cheery and just overall awesome?!?
It reflects Terry and her family so much more! 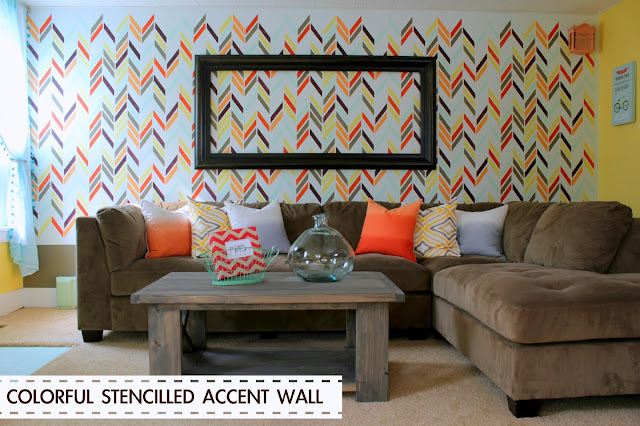 We love the impact an accent wall can have and after we removed the circa 1970s wallpaper, we knew that a Royal Design Studios stencil was the way to go! We’ll be posting on how to remove wallpaper (we know you want our tips and tricks!) and all about stenciling an accent wall.  For now, just enjoy the eye candy! 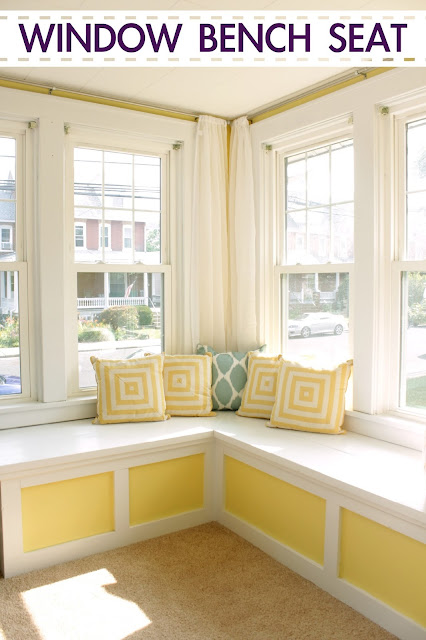 Terry’s family room connected directly to this tiny sunroom she uses as an office and study area.  We didn’t have money for new chairs, but we were able to build a bench seat (all we needed was wood and 1 piece of drywall!   We tossed on a few World Market pillows that were on major clearance and we had ourselves a super inviting sunroom! I literally had to pull Jess away from this comfy seat to keep working! 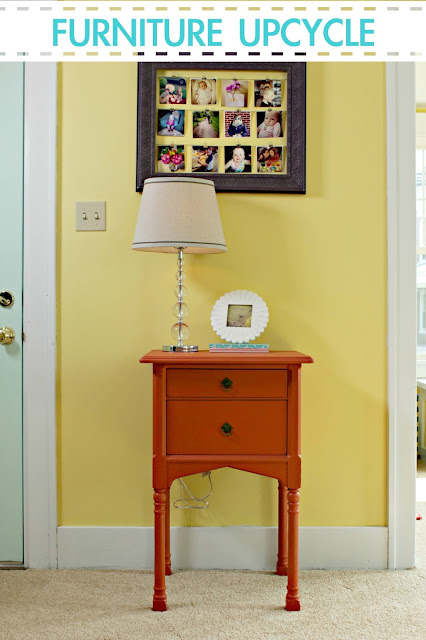 We worked with furniture Terry owned, like this gem and just gave it  new sassy swaga with some paint and two pieces of hardware.  If you have a piece of furniture that seems beyond dated, just try giving it a bold color paint and see what happens- it’s kind of like magic! 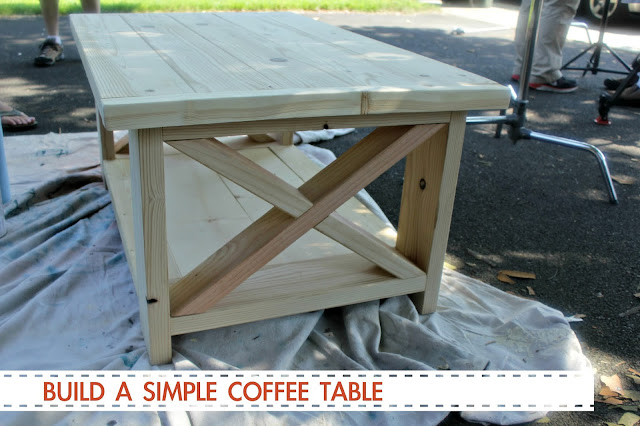 Some of Terry’s furniture we used (like the adorable table we upcycled), but other things like the huge ottoman they had, had to go.  Instead, we built our own table using 2x4s and 2x6s.  This piece looks so expensive because of the X frame, but it’s easy-peasy to build.
I think my favorite thing from this episode was seeing how empowered Terry and Jesse felt.  I sound all Dr. Phil, but I’m serious! They thought they just had to settle for how their house was, but now they know the awesome potential it has!  Since we filmed that episode Terry has sent us pictures of other furniture they’ve upcycled, and she’s painted her dining room walls and all the trim!  Jess and I feel like proud Mamas!
So, no, we can’t come to every single reader’s home (we wish we could!!), but hopefully by seeing what we’re doing with homeowners on Knock It Off, you’re feeling like you don’t need to settle either!
Here’a a little more before and after action for ya! 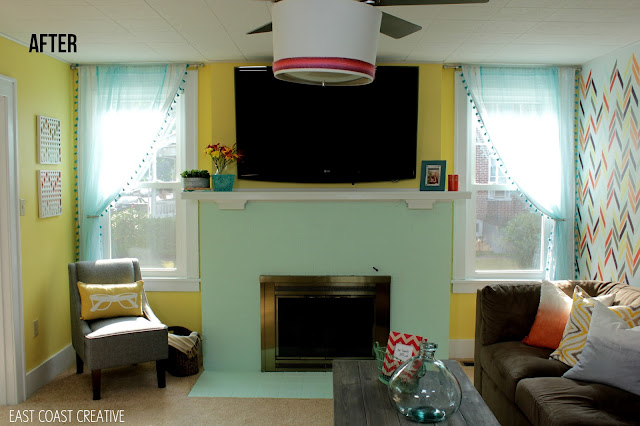 Hello adorable sunglasses pillow!  Thanks to Homegoods for always having amazing things to use in our makeovers! 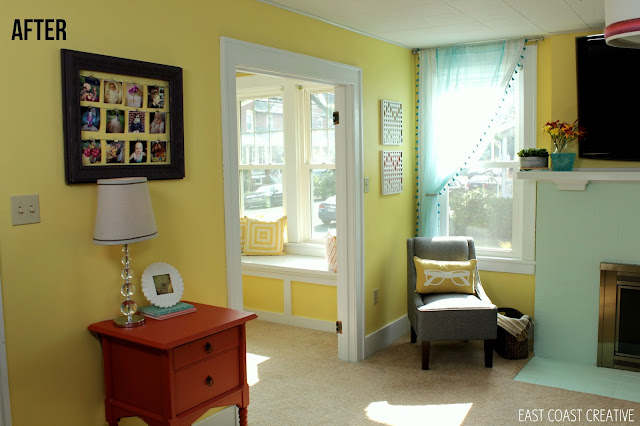 See how the little sunroom flows right off the family room? 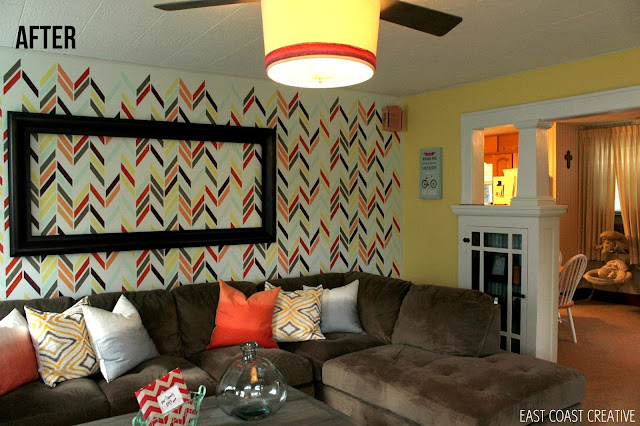 If you missed this episode, what are you waiting for?  Click HERE to watch it online!
We promise we’ll get all these tutorials to you really soon!  I mean with our amazing intern Diana, is there anything we can’t do??  🙂  She’s the best!
What do you think of this makeover?
Do you have one of those rooms in your house
where you just feel stuck?  Do Tell!